106. THE CHOSEN – Behind the Scenes with Director Dallas Jenkins 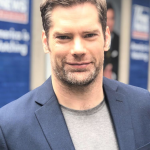 Dallas Jenkins is the Creator and Director of The Chosen, the #1 Crowdfunded Media Project of all time, raising 10 Million dollars from 16,000 investors. This groundbreaking streaming TV series about the life of Jesus and those that encountered him was created completely outside the Hollywood system to maintain content control. The decision to remain autonomous led The Chosen Team to come up with new and innovative ways for viewers to experience The Chosen including the First-Ever Worldwide Launch of a Streaming TV Series via its Own App.

Two years ago this began as a short film for Dallas' local church, shot entirely on his friend's farm in Illinois. So far, Season One of The Chosen has been downloaded in 180 countries worldwide and viewed over 4.5 million times and is being translated into 52 languages. The new 8-episode first season tells the stories of characters in the Gospels who encountered Jesus and were changed forever.

Dallas Jenkins, son of celebrated Left Behind author Jerry Jenkins, first produced the independent feature Hometown Legend at the age of 25 and shepherded it to distribution by Warner Brothers. In the nearly 20 years since then, he has directed and produced over a dozen feature and short films for companies such as Universal, Lionsgate, Pureflix, Hallmark Channel, and Amazon. His most recent film, The Resurrection of Gavin Stone, released in theaters in 2017. He is now directing and producing the largest crowd-funded media project of all-time, a multi-season series about the life of Christ entitled The Chosen.

2 comments on “106. THE CHOSEN – Behind the Scenes with Director Dallas Jenkins”