Is there life on Europa? David W Brown, THE MISSION

A space journey to an alien ocean

Is there alien life on Europa? We may find out sooner than you think. And it just might be at the bottom of an alien ocean on an icy moon of Jupiter.

In this episode we going to explore Europa, the ice moon of Jupiter and the mission to get there. NASA is currently building the Europa Clipper spacecraft which will begin its voyage to the Jovian Moon in 2024. Joining us today to discuss his new book about this mission is David W. Brown. David is an award-winning writer, whose work appears frequently in The New York Times, Scientific American and Smithsonian. He is an Antarctic expeditioner, an endurance runner, a former U.S. Army paratrooper, and a veteran of Afghanistan. David just released his latest book: THE MISSION, an amazing behind-the-scenes narrative of NASA’s deep space mission to Jupiter’s moon Europa, where alien life just might exist in an ocean beneath the frozen surface. 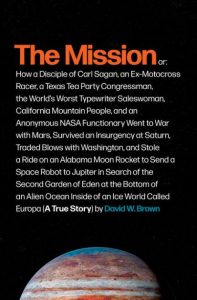 THE MISSION, or: How a Disciple of Carl Sagan, an Ex-Motocross Racer, a Texas Tea Party Congressman, the World's Worst Typewriter Saleswoman, California Mountain People, and an Anonymous NASA Functionary Went to War with Mars, Survived an Insurgency at Saturn, Traded Blows with Washington, and Stole a Ride on an Alabama Moon Rocket to Send a Space Robot to Jupiter in Search of the Second Garden of Eden at the Bottom of an Alien Ocean Inside of an Ice World Called Europa (A True Story)