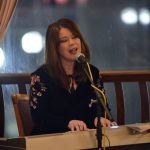 Singer-songwriter Angela Predhomme makes laid back, positive, soulful music. Angela's songs have been heard by millions through television, film, and streaming channels. Her music was in the popular Hallmark movie “Christmas on Honeysuckle Lane,” Lifetime’s hit show “Dance Moms,” Freeform’s “Switched at Birth,” commercials for Fiat and ING Bank, and more. Angela joins us today to discuss her incredible music and her newest album, LOVE.

Angela was a finalist in Adweek’s advertising music contest, and won finalist placement in the Song of the Year contest for her songs “Extra Day” and “My New Favorite Song,” among other songwriting accolades.  Angela has also been featured on the radio industry hub, AllAccess, and interviewed as a “rising star” in Thrive Global and Medium’s Authority Magazine.

You may have heard Angela's music on AAA, public or college radio, or in retail locations. No matter where you’ve heard her songs, though, one thing is certain: she loves to write music. Angela gives composing, writing, playing and singing her all.

Music is her passion. Angela’s first instrument was the piano, and she later took up classical voice and the acoustic guitar. Early on, she was influenced by the music her family listened to, which included everything from 1950’s R & B to the popular music of the time. Growing up in the Detroit area where Motown music invokes a special pride, Angela was exposed to the great work of artists like Marvin Gaye and Smokey Robinson. Major influences include The Beatles, The Rolling Stones, Ray Charles, and vocalists Christina Aguilera, Sarah McLachlan, Norah Jones and the timeless voice of Sam Cooke.

Always striving to grow as a composer, singer and musician, she never stops analyzing music theory and pushing herself as a singer and composer. Angela is an active member of local and national songwriting groups. With the goal of making music that can stand up with the best of the best, Angela Predhomme will continue to develop her honest, thoughtful songwriting, and her captivating, bluesy voice.

Songs used in this episode from Angela Predhomme's album LOVE: